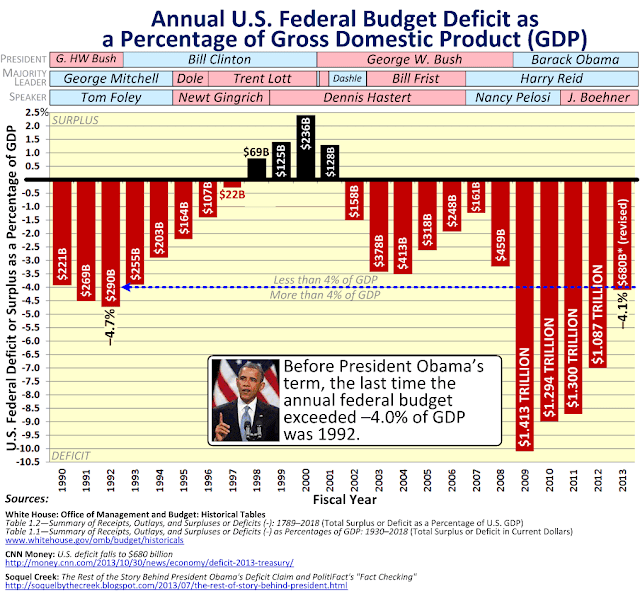 The U.S. federal budget deficit dropped below the $1 TRILLION mark for the first time during the Obama Presidency.  Many politicians, including Senate Majority Leader Harry Reid, were quick to herald this "incredible accomplishment."  After all, the President has been busy claiming that he's reduced the deficit at the fastest rate in 60 years.  Naturally, he forgot to mention that his administration also INCREASED deficits at the fastest rate in 60 years.

While a $680 BILLION deficit may seem a major accomplishment, it represents 4.1% of U.S. gross domestic product (GDP).  Prior to the Obama Presidency, the last time the U.S. budget deficit was this high was 1992 during the last year of the George H.W. ("read my lips") Bush Presidency.  Borrowing was approximately $1.85 BILLION for each and every day of the fiscal year.

Posted by Soquel by the Creek at 5:04 PM No comments:

President John F. Kennedy, a Democrat, once said the following on January 29, 1961, otherwise known as Roosevelt Day.  With such pro-American "violent Tea Party rhetoric," can you imagine what today's Democratic Party would call him?

In my own native state of Massachusetts, the battle for American freedom was begun by the thousands of farmers and tradesmen who made up the Minute Men--citizens who were ready to defend their liberty at a moment's notice. Today we need a nation of Minute Men; citizens who are not only prepared to take up arms, but citizens who regard the preservation of freedom as a basic purpose of their daily life and who are willing to consciously work and sacrifice for that freedom. The cause of liberty, the cause of America, cannot succeed with any lesser effort.

Posted by Soquel by the Creek at 2:31 PM No comments: 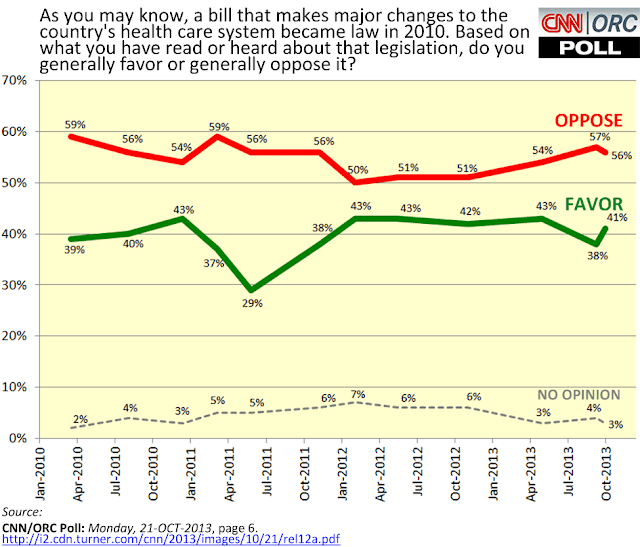 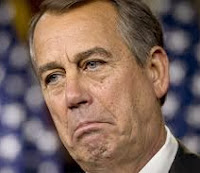 A recent CNN/ORC poll attracted significant media attention because it indicates that a majority of those polled say that they favor somebody else as Speaker of the House over John Boehner.  See Question 10.

Sadly, the media failed to notice Question 14 that shows that a majority of those polled have consistently opposed President Obama's health care plan.  See the top graph.  In fact, the President's plan has never once received majority support.

For the record, I'm not a John Boehner fan either.  I just find it amusing what the media reports and what the media chooses to ignore.
Posted by Soquel by the Creek at 11:36 AM No comments:

The Tea Party and Charges of Sedition

There are those among the Left who seek to file charges of sedition or inflict physical violence upon those associated with the Tea Party.  I suggest that both sides consider the wise words of former President Theodore Roosevelt, written when many challenged the Wilson Administration's seeming unconstitutional abuse of power during World War I.

The President is merely the most important among a large number of public servants. He should be supported or opposed exactly to the degree which is warranted by his good conduct or bad conduct, his efficiency or inefficiency in rendering loyal, able, and disinterested service to the Nation as a whole. Therefore it is absolutely necessary that there should be full liberty to tell the truth about his acts, and this means that it is exactly necessary to blame him when he does wrong as to praise him when he does right. Any other attitude in an American citizen is both base and servile. To announce that there must be no criticism of the President, or that we are to stand by the President, right or wrong, is not only unpatriotic and servile, but is morally treasonable to the American public. Nothing but the truth should be spoken about him or any one else. But it is even more important to tell the truth, pleasant or unpleasant, about him than about any one else."

Apparently, even former First Lady and former Secretary of State Hillary Clinton seems to agree with this view.

Posted by Soquel by the Creek at 5:16 PM No comments:

The October 2013 government shutdown agreement resulted in Congress temporarily(?) removing the debt ceiling. As predicted in a previous post, Treasury has now added a record, $328 BILLION in unrecognized debt to the U.S. public debt in a single day--nearly a third of a TRILLION dollars in debt. This "new" debt was kept off the public debt to avoid exceeding the legal debt limit. The money has already been spent and was "borrowed" from a variety of other public funds including the retirement plans for federal employees. From the chart, even after adding $328 BILLION, Treasury will likely add another $25 BILLION in the next following days, until the actual public debt approaches the blue dashed trend line. 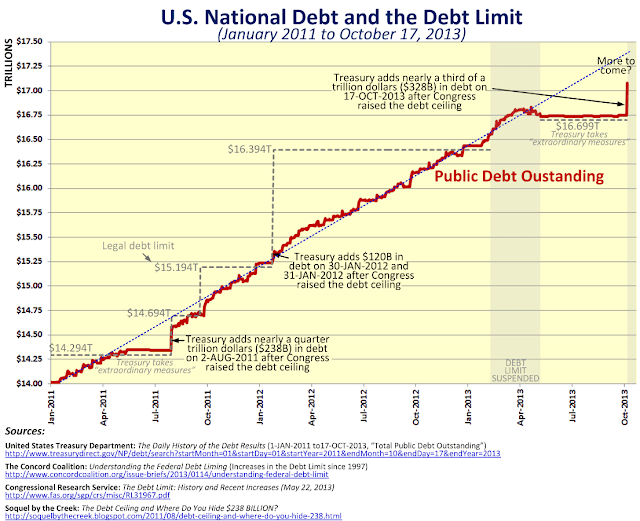 The following chart shows the daily increase or decrease in the U.S. national debt, measured in billions of dollars. It's the same information as above but only presents the day-to-day changes in the debt. The previous record increase followed the 2011 debt-limit debate when Treasury dropped $238 BILLION of off-the-books debt onto the public debt. The latest debt-limit impasse lasted longer and Treasury built up significantly more off-the-books debt. As a result, as soon as Congress removed the limit, Treasury officially recognized $328 BILLION in "new" debt. 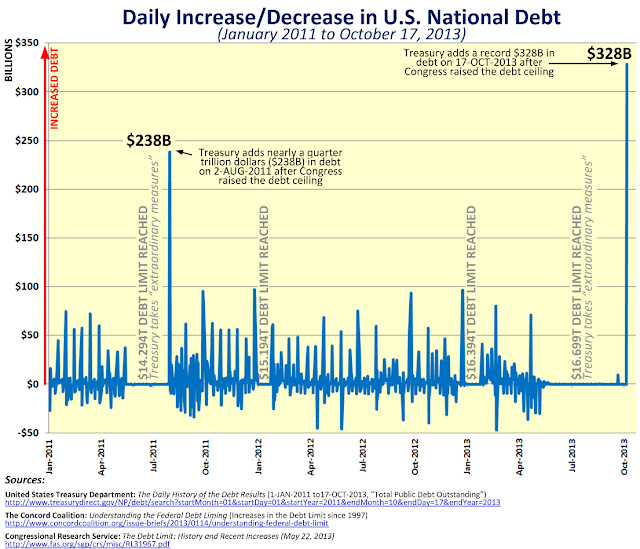 Even a drunken sailor can predict that our current debt trajectory is "unsustainable." So what do we do about it?

The Debt Ceiling and Where Do You Hide $238 BILLION?
http://soquelbythecreek.blogspot.com/2011/08/debt-ceiling-and-where-do-you-hide-238.html
Posted by Soquel by the Creek at 2:35 PM 1 comment:

California has the Nation's 6th Highest Incident of Abortion

California Governor Jerry Brown signed a bill expanding the the list of non-physician professionals allowed to provide abortion procedures in the state.  Based on Census data, California only has the nation's 6th-highest rate of abortion, behind Delaware, New York, New Jersey, Washington, D.C., and Maryland. California's incident of abortion far exceeds the national average.  That's how "rare" abortion is in California. 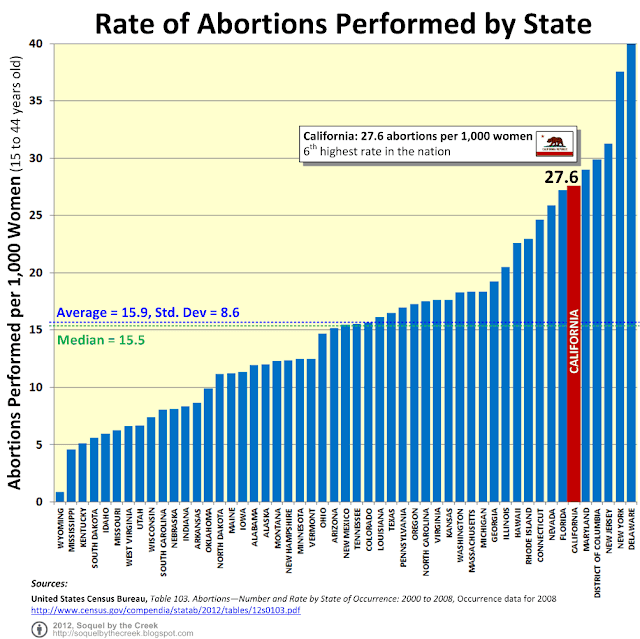 The good new?  The California Legislature finally deregulated a business.  Too bad it for abortions.
Posted by Soquel by the Creek at 5:02 PM No comments:

Remember back in 2006 when President Obama spoke like a member of the Tea Party (the Tea Party hadn't been created yet)?

As the United States Congress and the President once again discuss raising the debt ceiling, it's good to ponder the words from then-Senator Barack Obama to the Senate on 2006. Back then, our official public debt was just $8.6 TRILLION.  It currently stands near $17 TRILLION, much of that increase under President Obama's reign.

The fact that we are here today to debate raising America's debt limit is a sign of leadership failure. It is a sign that the U.S. Government can't pay its own bills. It is a sign that we now depend on ongoing financial assistance from foreign countries to finance our Government's reckless fiscal policies.

Over the past 5 years, our federal debt has increased by to That is "trillion" with a "T." That is money that we have borrowed from the Social Security trust fund, borrowed from China and Japan, borrowed from American taxpayers. And over the next between now and 2011, the President's budget will increase the debt by almost another
Numbers that large are sometimes hard to understand. Some people may wonder why they matter. Here is why: This year, the Federal Government will spend on interest. That is more money to pay interest on our national debt than we'll spend on Medicaid and the State Children's Health Insurance Program. That is more money to pay interest on our debt this year than we will spend on education, homeland security, transportation, and veterans benefits combined. It is more money in one year than we are likely to spend to rebuild the devastated gulf coast in a way that honors the best of America.

And the cost of our debt is one of the fastest growing expenses in the Federal budget. This rising debt is a hidden domestic enemy, robbing our cities and States of critical investments in infrastructure like bridges, ports, and levees; robbing our families and our children of critical investments in education and health care reform; robbing our seniors of the retirement and health security they have counted on. Every dollar we pay in interest is a dollar that is not going to investment in America's priorities. Instead, interest payments are a significant tax on all Americans — a debt tax that Washington doesn't want to talk about. If Washington were serious about honest tax relief in this country, we would see an effort to reduce our national debt by returning to responsible fiscal policies.

But we are not doing that. Despite repeated efforts by Senators Conrad and Feingold, the Senate continues to reject a return to the commonsense rules that used to apply. Previously, rules applied both to increases in mandatory spending and to tax cuts. The Senate had to abide by the commonsense budgeting principle of balancing expenses and revenues. Unfortunately, the principle was abandoned, and now the demands of budget discipline apply only to spending. As a result, tax breaks have not been paid for by reductions in Federal spending, and thus the only way to pay for them has been to increase our deficit to historically high levels and borrow more and more money. Now we have to pay for those tax breaks plus the cost of borrowing for them. Instead of reducing the deficit, as some people claimed, the fiscal policies of this administration and its allies in Congress will add more than in debt for each of the next That is why I will once again cosponsor the amendment and continue to hope that my colleagues will return to a smart rule that has worked in the past and can work again.

Our debt also matters internationally. My friend, the ranking member of the Senate Budget Committee, likes to remind us that it took to run up only of foreign-held debt. This administration did more than that in just Now, there is nothing wrong with borrowing from foreign countries. But we must remember that the more we depend on foreign nations to lend us money, the more our economic security is tied to the whims of foreign leaders whose interests might not be aligned with ours.

Increasing America's debt weakens us domestically and internationally. Leadership means that "the buck stops here." Instead, Washington is shifting the burden of bad choices today onto the backs of our children and grandchildren. America has a debt problem and a failure of leadership. Americans deserve better.
Posted by Soquel by the Creek at 12:03 PM No comments: