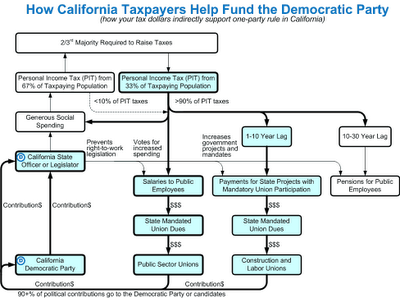 Posted by Soquel by the Creek at 9:56 AM No comments: 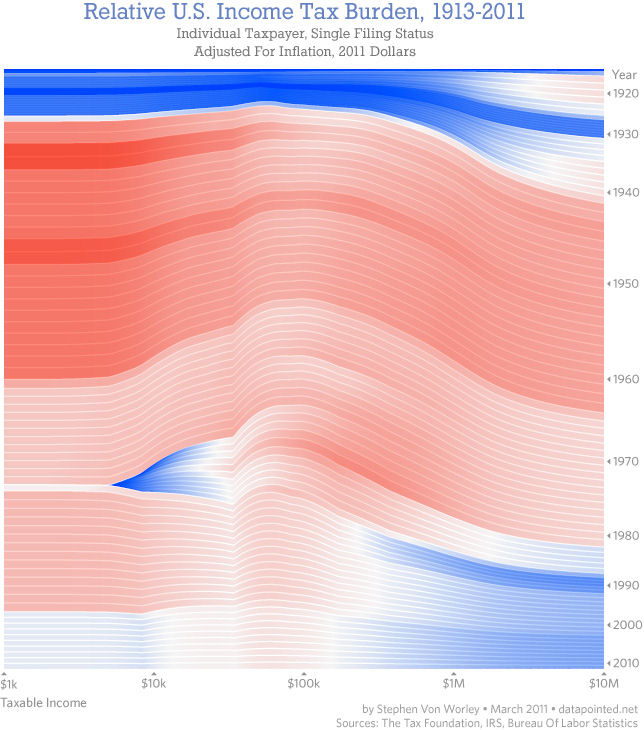 "The power to tax is the power to destroy"
John Marshall, Chief Justice of the United States (1801-1835)

A recent blog post regarding U.S. income tax caught my eye. The post included an aesthetically beautiful infographic from data artist Stephen Von Worley and his Data Pointed blog that, according to multiple blog posts, purports to show once again that those #@*&# rich people are just not being taxed enough.

"Chart of the Day, US taxes edition"blogs.reuters.com/felix-salmon/2011/03/15/chart-of-the-day-us-taxes-edition

Unfortunately, as an engineer and scientist, I have a number of problems with the infographic. One problem is that the original chart is mislabeled, based on the data that it presents as I will explain below. Another problem is that many people apparently misinterpreted what the chart actually tells you.

Infographics, though often useful, are essentially "visual statistics," which reminds me of a favorite quote.

"Statistics are like bikinis. What they reveal is suggestive, but what they conceal is vital." -- Aaron Levenstein

Why the Chart is Mislabeled
The original post proclaims "The tax man cometh, and to illustrate the inequities of his cleft-hoofed embrace, we’ve charted the shift in U.S. income taxes from rich to poor over the past century." Unfortunately, the data behind the chart does NOT show this.

The chart claims to show relative tax burden, which in the post is defined as "the amount of tax due relative to the long-term average at each income level."

So what does the infographic actually show? After some reverse engineering, it actually shows the relative change in marginal income tax rate compared to historical averages. Keywords here are "relative change, " "marginal income tax rate," and "historical averages" It’s a common mistake, but high marginal tax rates DO NOT equate to actual tax burden or increased revenues for the government. High marginal tax rates do affect behavior and dissuade earning and investment plus encourage tax avoidance strategies.

Choose Your Average
The non-obvious distortion is that the chart relies on historical averages. Averages themselves can be greatly deceiving.

"Then there is the man who drowned crossing a stream with an average depth of six inches." -- W.I.E. Gates

"The average human has one breast and one testicle." -- Des McHale

Fist, a little background information. Since the inception of the federal income tax, the top marginal tax rate ranged from 7% to 94%. The chart below is color coded according to a chart used later in this post. The source data is available here. 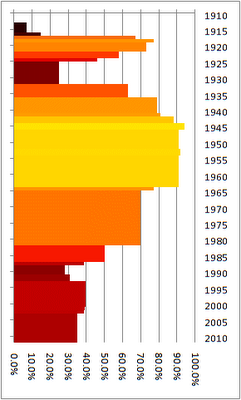 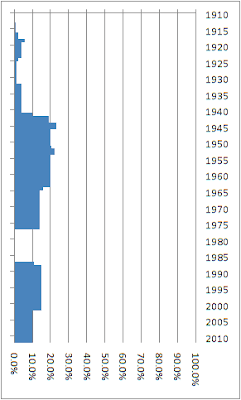 The average marginal tax rate for top earners was over 59%, with a standard deviation of ±25% for the specified 99 year period (1913-2011) since the 16th Amendment was passed. If considering the entire 235-year history of the United States, the average drops to 25%. If using just the last 25 years, then the historical average is 35.8%. Choosing the specific time period dramatically affects the average. 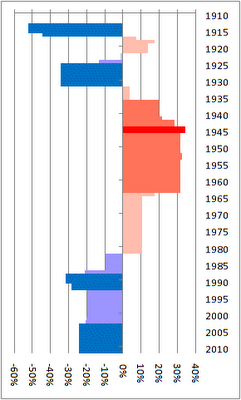 Marginal tax rates for all income taxpayers were at historic highs for twenty years, from 1944 to 1963. For upper income taxpayers, the top marginal rate was 90% or more. Even for the bottom of the income ladder, the rates were over 20%.

The History Embedded in the Charts
With due apologies to Stephen Von Worley for mashing up two of his beautiful infographics, here is some of the history of the U.S. income tax embedded in the charts. The numbered annotations are described below.

I re-oriented this graphic to match the "tax burden" chart. 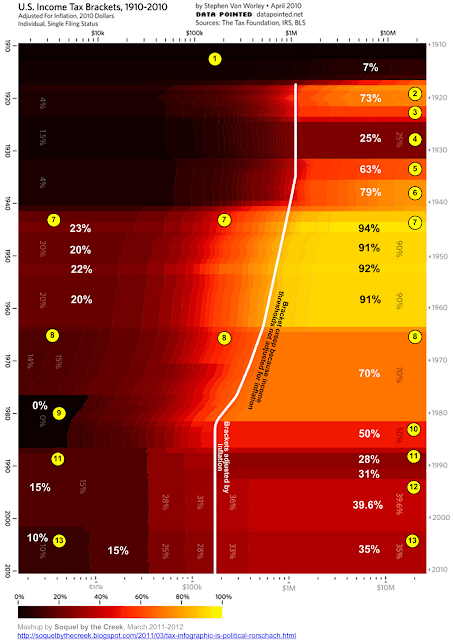 This is an aesthetically beautiful infographic showing how the marginal rates changed compared to their historical average, over the lifetime of 99-year history since the 16th Amendment was ratified. 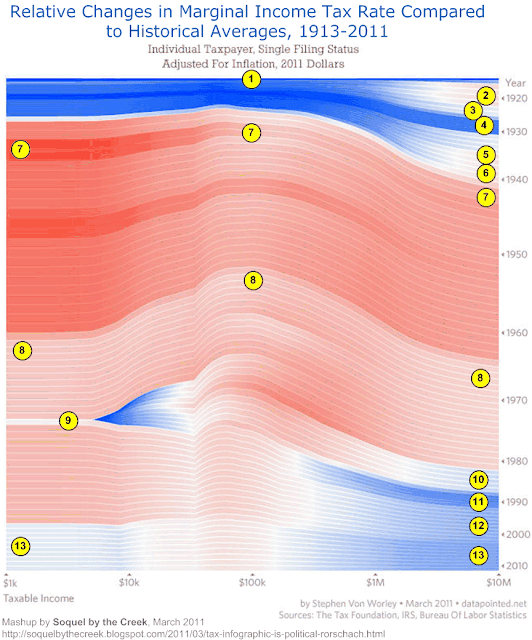 Note 1:Two lines are added to the United States Constitution upon ratification of the 16th Amendment, legalizing federal income tax.

"The Congress shall have power to lay and collect taxes on incomes, from whatever source derived, without apportionment among the several States, and without regard to any census or enumeration."

Congress subsequently passed the Revenue Act of 1913. The 18 pages of legislation imposed a federal income tax ranging from 1% to 7%, depending on income. The 1913 federal income tax form and instructions are simple and run just four pages.

Treasury Secretary Mellon understood the negative impact on the high level of taxation.

"The present system is a failure. It was an emergency measure, adopted under the pressure of war necessity and not to be counted upon as a permanent part of our revenue structure. The high rates put pressure on taxpayers to reduce their taxable income, tend to destroy individual initiative and enterprise, and seriously impede the development of productive business…. Ways will always be found to avoid taxes so destructive in their nature, and the only way to save the situation is to put the taxes on a reasonable basis that will permit business to go on and industry to develop."

Note 3:
Due to the unpopularity of the Wilson Administration and World War I, Warren G. Harding was elected President, along with solid Republican majorities in Congress. Congress reduced tax rates by passing the Revenue Act of 1921.

Note 5:
The Republican Congress had previously passed the disastrous Smoot Hawley Tariff, heavily opposed by Democrats. Democrats made major gains in the Congressional election of 1930.

The combination of bad policy and increased taxation lead to disastrous unemployment, shifts in economic activity, and decreased investment activity. Welcome to the Great Depression.

Note 7:The immense costs of the "New Deal" policies of FDR's Administration plus World War II lead to the highest marginal tax rates for all income levels. Top marginal rates reach an astonishing 94%. Even low-income taxpayers faced a 22.2% rate.

The United States emerged from World War II with its industrial and manufacturing capacity relatively untouched. Much of Europe and Asia were enslaved by oppressive Communist regimes. India was seduced by the unfulfilled promises of Socialism. The United States helped rebuild Europe and Japan and was engaged in a Cold War with the Soviet Union and the Communist Chinese.

Because the United States was essentially the only game in town for those that enjoy Western-style democracy, the federal government could continue to oppressive tax rates.

The tax cut was made popular by Democratic President John F. Kennedy and was an attempt to spur the U.S. economy. Unfortunately, President Kennedy was assassinated before the legislation was finally enacted.

Note 9:The Tax Reduction and Simplification Act of 1977 essentially reduced bottom tax rates to 0% for the next ten years. Top rates were unaffected.

Tax brackets indexed to inflation, reducing "bracket creep." Note how the white line in the tax brackets chart flattens after this point.

Although many consider it the second Reagan Tax cut, the act was officially sponsored by Democrats, Richard Gephardt of Missouri in the House of Representatives and Bill Bradley of New Jersey in the Senate.

The act received no Republican votes and was opposed by some Democrats. Vice-President Gore provided the tie-breaking vote in the United States Senate.

In response to the further recession caused by the September 11, 2001 World Trade Center terrorist attack, Congress accelerated some of the changes by passing the Jobs and Growth Tax Relief Reconciliation Act of 2003.

The Open Question
So the question remains, are marginal rates too low for top income earners?

By international comparison, no.

The marginal tax rate is less important than the effective tax rate. Despite the official tax rate, how much to people really pay. This is measured as the tax paid divided by the adjusted gross income.

The Tax Foundation tracks this information (see Table 8), but only since 1980. Using their information, the following chart shows that top tax payers pay more as a share of the adjusted gross income (AGI). The calculations for AGI changed with the 1986 tax law, which results in the apparent spike on the chart.

Because top taxpayers have more income, they would also pay more taxes in absolute dollars, even if their tax rates were the same or lower. However, the chart shows that high-income taxpayers do indeed pay a larger share of their income in taxes than do almost all income classes.

Average Effective Tax Rate by Income Class and by Year 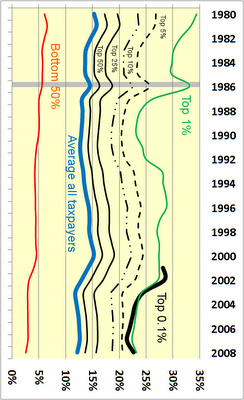 This effect is also obvious looking at the amount of share of revenue contributed by different income levels. Not surprisingly, high-income taxpayers pay the bulk of U.S. income tax.

Who Pays Their "Fair Share" in California?
soquelbythecreek.blogspot.com/2011/10/who-pays-their-fair-share-in-california.html
Posted by Soquel by the Creek at 10:50 AM No comments: