Van Jones is the Source for "Koch Plantation"

At a Tea Party counter-union rally in Jefferson City, Missouri, a MoveOn.org counter-counter protester responded to a sign proclaiming "Liberty, Not Slavery" by telling the Tea Party members that "You're on Koch's plantation." The incident was reported by Gateway Pundit and later on the The Blaze. The reference was obviously to the supposedly "evil" Koch Brothers, who fund Americans for Prosperity (AFP), a major ally of the Tea Party. Oh, and David Koch also funds NOVA on PBS (scroll to the bottom of the PBS page) so you know he must be evil, right?
That phrase, "Koch's plantation," sounded familiar. Where had I heard it before? 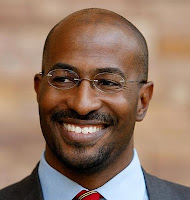 In January 2011, the Koch Brothers held a secretive meeting in Palm Springs for the ultrawealthy and the well-connected on the Right. Many from the American Left were there to protest (and protest they did).
The "Koch plantation" reference comes directly from a Van Jones speech, at a meeting sponsored by Common Cause to protest the Koch Brothers' event.
The "plantation" line is at about 6 minutes, 55 seconds ([6:55]) into the video.
"We will not live on a national plantation run by the Koch Brothers."
The remainder of the speech is classic Van Jones partisan, class-warfare rhetoric with a few quotable moments.
[0:22]
"I was born in 1968 ... that was the year 'They' assassinated hope in America."
Hmm, so who is this nameless "They" for whom Van Jones cannot mention? Is he aware of some conspiracy that he dare not mention? There were many prominent political figures assassinated in 1968, including political violence throughout the United States.
Van Jones seems fascinated by '68, the year of his birth. His Twitter account is @VanJones68.
[0:39]
"... and 'They' tried to assassinate hope in our country."
Again, who is "They"? Misguided white supremacists? Palestinians? The Democratic Party? Rioters?
[0:50]
Speaks about 40 years in the Wilderness.
[4:47]
"Our political process has been hijacked by people who are only interested in their own gain, who are only interested in their own profit, and are willing to tell any lie, and spend any amount of money, to prevent America's government from coming to the rescue of the American people."
Unfortunately, many Americans feel that government has become the problem--not the solution. I do not want to be "rescued" by a government that wishes to dictate every matter in my life. Nor do I wish the government to confiscate my wealth to pay for other's follies.
[5:15]
Talks about Tea Party and their concern about Liberty. But, there are two threats. Over-concentration of political power. But there is a greater threat. Excessive concentration of economic power.
[9:12]
"If you want to know what side to bet on, ... big money mean people ... or little people with the truth on their side ... look over there in Egypt"
... attendee ...
[9:33]
"Bring Egypt here!"
I find it amazing that the Left is so worried about the Koch Brothers and is evidently is not bothered or worried about the spending by the likes of Stephen Bing, Peter B. Lewis, Fred Eychaner, Haim Saban, Peter Angelos, George Soros, etc., etc., shown here and here. Or, how about those well-connected, ultrawealthy from the Left, many from outside of California, that attempted to impose and formally institute one-party rule in California by passing Proposition 27? Even Common Cause, who openly fights the secretive ways on the Koch Brothers, fought against the alliance of well-financed backers of Proposition 27. For that, I give Common Cause some credit.
See also ...
"Capital Rivals: Koch Brothers vs. George Soros"
www.opensecrets.org/news/2010/09/opensecrets-battle---koch-brothers.html
"Koch Industries Continues to Expand Political Influence"
www.opensecrets.org/news/2010/10/koch-industries-continues-to-expand-1.html
"California Proposition 27, Elimination of Citizen Redistricting Commission (2010)"
ballotpedia.org/wiki/index.php/California_Proposition_27,_Elimination_of_Citizen_Redistricting_Commission_(2010)
"Proposition 27 Revealed!"
soquelbythecreek.blogspot.com/2010/09/proposition-27-revealed.html
Posted by Soquel by the Creek at 3:26 PM No comments:

I have great respect for the LAO and include links to their material to view without comment. Jason Sisney form the LAO presents "Public Retirement Benefits, Options for the Future," which takes just 15 minutes to watch. The materials provided include the webcast, a summary transcript of the webcast, and copy of the presentation slides.
Presentation Slides
Webcast (via YouTube)

Transcript
Posted by Soquel by the Creek at 2:40 PM No comments:

Do Public-Employee Unions Have Major Influence in California Politics? 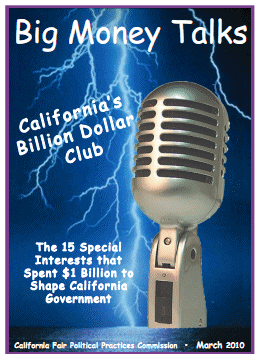 The relevant information appears on page 10, in a table titled "The 15 That Spent $1 Billion to Influence California Voters and Public Officials." The data is shown below and available online here.

The minimum entry price for an organization was $34 million. The top spender, California Teachers Association (CTA), spent over $211 million.

Charting the data, the imbalance becomes quickly obvious. The two top senders in California politics are both public-sector unions. California Teachers Association (CTA) is by far and above the largest spender, spending nearly twice that of the next biggest spender, California State Council of Service Employees (SEIU). 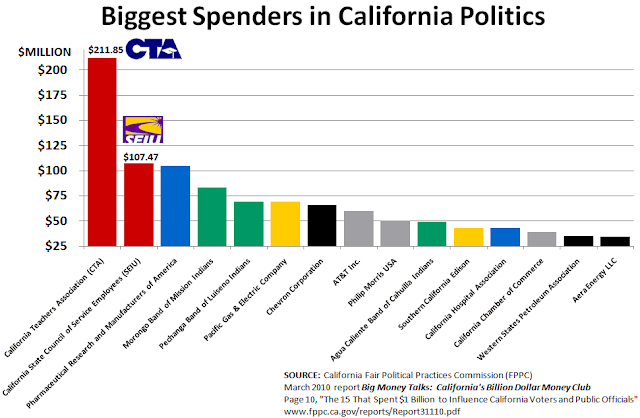 Likewise, charting the spending by the type of organization, again, an obvious pattern appears. According to FPPC data, roughly thirty cents of every dollar spent by the big spenders in California politics comes from the two major California public-sector unions. And where do the unions get all that money? From employee's state-mandated union dues, essentially paid by California taxpayers. With whom do these public-sector unions bargain for their salary and benefits? With many of the same Legislators placed in office courtesy of generous campaign funding from labor. Am I the only one that sees the inherent conflict of interest? 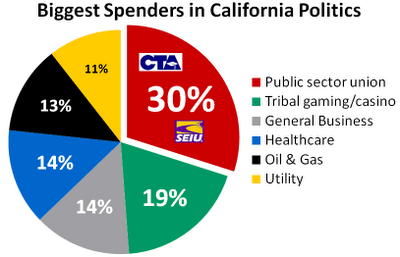 As an aside, I'm also amazed by the spending from California's native American tribes, apparently related to casino gaming.