I have tremendous respect for Warren Buffett. I own shares in Berkshire Hathaway and he and his group of companies have generated some reasonable gains over the years.

But, is Mr. Buffett right? Do the superwealthy like him pay less than their "fair share" of taxes as he seemingly claims is his New York Times editorial? Mr. Buffett's non-scientific technique was to ask 20 of his employees how much tax they pay.

Likewise, Mr. Buffett didn't distinguish between income taxes, sales taxes, corporate taxes, estate taxes, or payroll taxes. I'll focus on federal income taxes, which generates one of the largest shares of revenue for the federal government. Payroll taxes (Social Security and Medicare) are another matter that I'll cover in a later post. Likewise, Mr. Buffett didn't distinguish between MARGINAL tax rate or EFFECTIVE tax rate. The MARGINAL rate is the amount that you pay on each additional dollar of income. The EFFECTIVE rate is how much you pay in total taxes, divided by your total income. The EFFECTIVE rate is nearly always less than the MARGINAL rate, although most people remember the MARGINAL tax rate because it usually seems so extreme. See "Pretty Pictures and a Political Rorschach Test" to see how marginal rates have changed over time.

Unfortunately, Mr. Buffett's non-scientific sample of 21 taxpayers represents just 0.000015% of the total population of 140 million taxpayers, or about 1 in 6.664 MILLION taxpayers. In statistics, this is called a non-representative sample. Given that Mr. Buffett by himself is also a member of an elite group, the Top 400 taxpayers, any result will be highly skewed.

Wouldn't it be great if we could use real IRS data and could validate if wealthy taxpayers were indeed not paying their "fair share"? Oh wait, we can! The IRS provides freely downloadable summary statistics for all income taxes filed by year, income group, etc. Groups like the Tax Foundation and the Tax Policy Center use this data to report on how the tax burden falls on taxpayers. 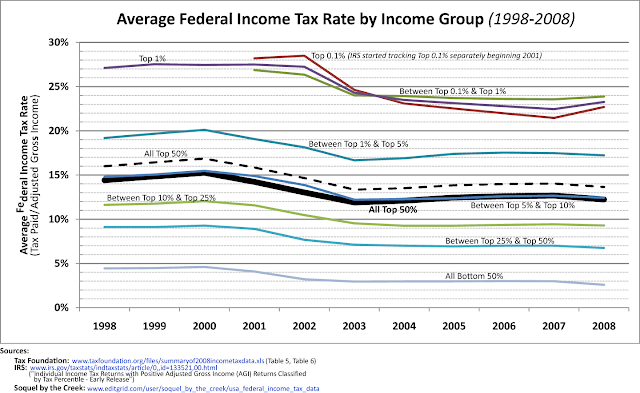 According to Warren Buffett's editorial, he paid $6,938,744 ($6.938 MILLION) in federal income taxes in 2010, representing 17.4% of his taxable income. So, is Warren Buffett scamming the system? The average tax bill for all taxpayers in 2008 (the latest year of data from the IRS), was $7,373, down from $7,911 in 2007. The average taxpayer paid 12.24% of his taxable income in federal income tax in 2008. Taxpayers in the Top 0.1% population paid an average $1,357,143 in taxes in 2008. Warren Buffet paid over $5 MILLION more! The Top 0.1% also paid 22.7% of their total income as income tax. Warren Buffet paid about 5.3% less. However, Mr. Buffett is 80 years old and like many others his age, he likely receives considerable income from long-term capital gains, which are presently taxed at 15%. Likewise, being a shrewd investor and having lived through prior times with much higher tax rates, Mr. Buffett likely has an extensive portfolio of tax-free municipal bonds and U.S. Treasuries, but this is conjecture.

Let's determine how much he made last year. He claims that he paid $6.939 MILLION in taxes and had a 17.4% effective tax rate. Divide $6.939 MILLION by 17.4% and you derive that his adjusted gross income was around $39.878 MILLION (a nice job, if you can get it!). Because 2010 tax data isn't yet available, I'll mix some apples and oranges using the top-line 2009 tax summary data. In 2009, the total US adjusted gross income (for tax purposes) was $7.63 TRILLION. The total 2009 federal income tax bill was $865.95 BILLION.
As do most wealthy taxpayers, Warren Buffett also pays a higher share of the total tax bill than his total share of US income. In fact, Warren Buffett pays 53% more in taxes than his share of income ((share of taxes / share of income) - 100%). A number greater than 0% indicates that the taxpayer is taxed on both income and on a fraction of accumulated wealth. A number less than 0% indicates that the taxpayer potentially receives government services that are subsidized by all other taxpayers. 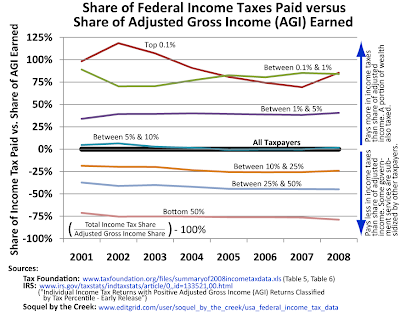 Using 2008 historical data for the Top 0.1% taxpayers (again, Mr. Buffett is in the Top 400 group or the Top 0.0003%), his share of taxes versus total income should be around 85%. His tax payments current are more in line with the Top 1% to 5% of taxpayers. If this Top 0.0003% taxpayer wants to keep up with the Top 0.1% of taxpayers, then his 2010 tax bill should be in the neighborhood of $11.128 MILLION instead of a "measly" $6.939 MILLION. However, if he wants to pay 22.7% of his income as tax to match the Top 0.1%, then he only needs to contribute another 5.3% of his income or $2.144 MILLION. Instead of waiting for the slow-moving Congress to take action, Mr. Buffett is free to voluntarily write a check for an addition $2.114 MILLION or $4.189 MILLION or more, unless perhaps he has better use of that money such as investing in the U.S. economy and creating jobs--two actions that the federal government that is seemingly incapable of doing.

The last time that Congress attempted to address "inequalities" in the U.S. tax code, it created the ill-conceived and poorly-constructed Alternative Minimum Tax (AMT). AMT was originally targeted at just 155 high-income taxpayers, who paid $0 in income tax but broke no law and merely followed existing U.S. tax code. Ultimately, because AMT was not indexed to inflation, it impacted millions of middle-class taxpayers (myself included).

You know what we're not discussing while wasting time on the definition of "fair share"? TAX REFORM! I believe that all sides agree that our current income tax system is antiquated and internationally un-competitive. Generally, you get less of whatever you tax. The U.S. government currently taxes work (jobs), investments, and savings. Instead, we should be taxing consumption! But, there will likely be no changes until the next major crisis.