President Obama is fond of saying that "millionaires and billionaires" are not paying their "fair share" of taxes.  Of course, the President never explicitly defines what someone's "fair share" should be.

Here is a chart showing the average effective tax rate for California taxpayers, paying the state's highly income-progressive Personal Income Tax (PIT).  The effective rate is the tax paid divided by the Adjusted Gross Income (AGI).  The effective tax rate for the supermajority (66.67%) of Californian taxpayer's was between 0% and 1.5% in 2008--the latest tax data available. Meanwhile, the superminority (33.33%) paid between 1.5% and 8.97%.  Why is this important?  California requires a two-thirds majority to pass a tax increase.  Effectively, the supermajority of Californian's impose excess taxes on the one-third majority. 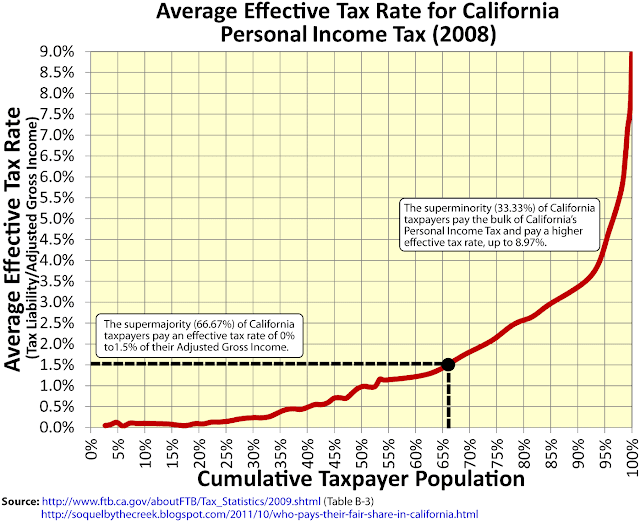 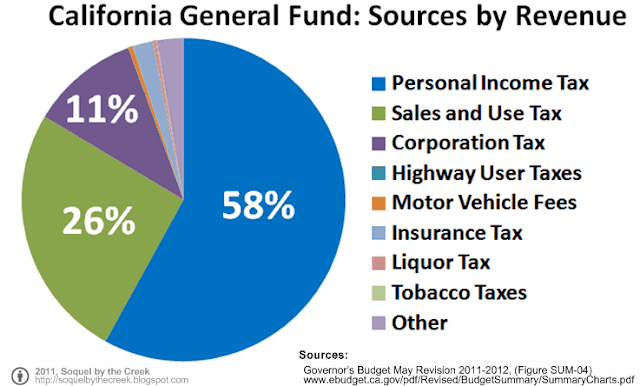 ... which pays for the majority of California's governmental services, including K-12 and secondary education, corrections, health and human services, etc. (see Figure SUM-05). 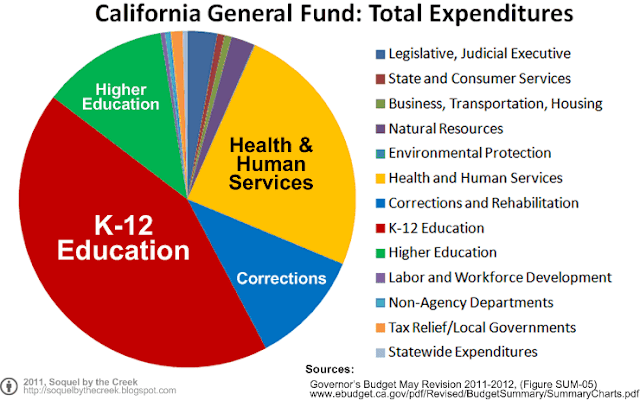 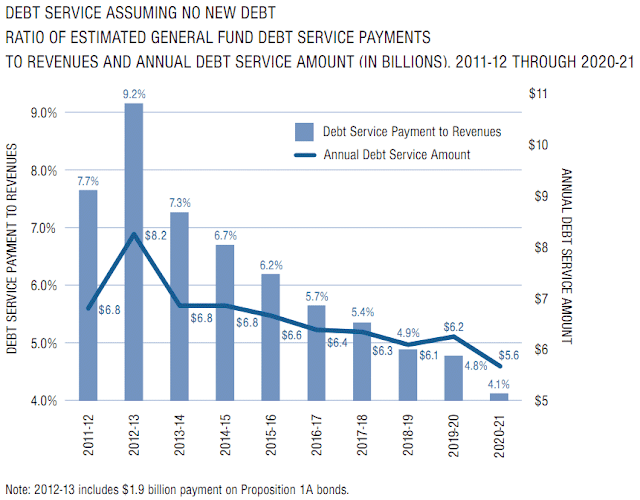 The 33.33% superminority pays roughly 94% of all California Personal Income Taxes (PIT), effectively contributing over half of the entire General Fund. The 66.67% supermajority contributes just the remaining 6% of PIT, and roughly 3% of the General Fund.  Those with an Adjusted Gross Income (AGI) of $50,000 or less were in the bottom 66.67% in 2008. 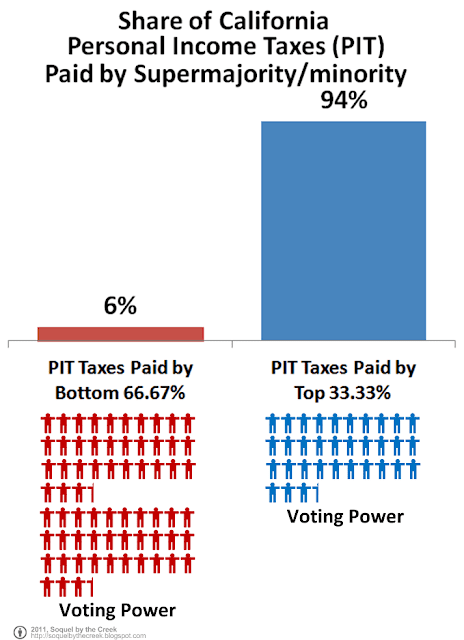 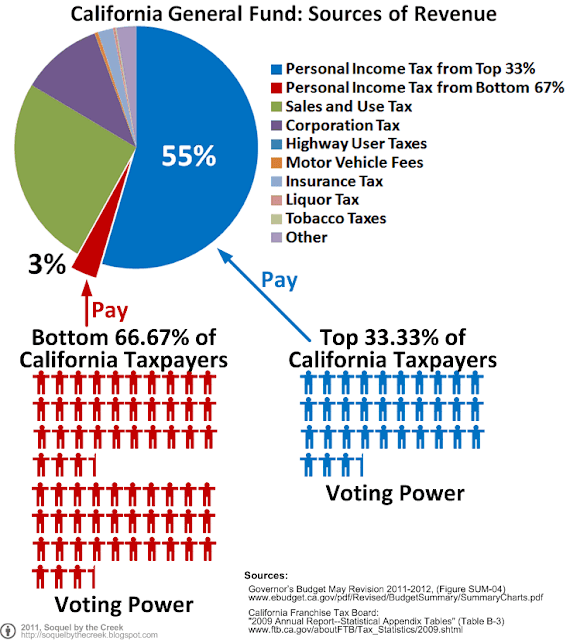 The Occupy Wall Street movement employs divisive "us-versus-them" class-warfare rhetoric when it talks of "The 99%" and "The 1%."  Maybe the "The 1%" in California aren't pulling their weight.  Let's look at the data.  Despite being only 1% of the taxpaying population, "The 1%" paid 42% of all California Personal Income Tax (PIT) in 2008--the latest data available.  On average, the tax rate paid by "The 1%"  was over three times higher than the average rate paid by "The 99%."  At the ballot box, "The 1%" represents about 0.86% of all registered voters.  Want to understand why there is so much money distorting our political process?  It's because one set of voters decides how to spend the money raised by a minority of wealthy voters, who cannot prevail at the ballot box. 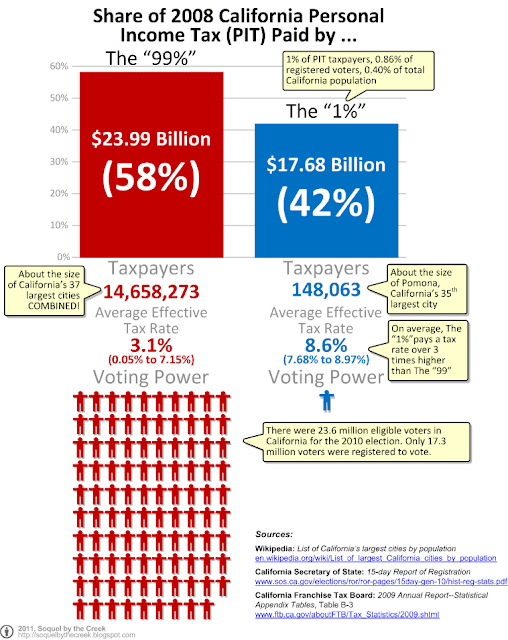 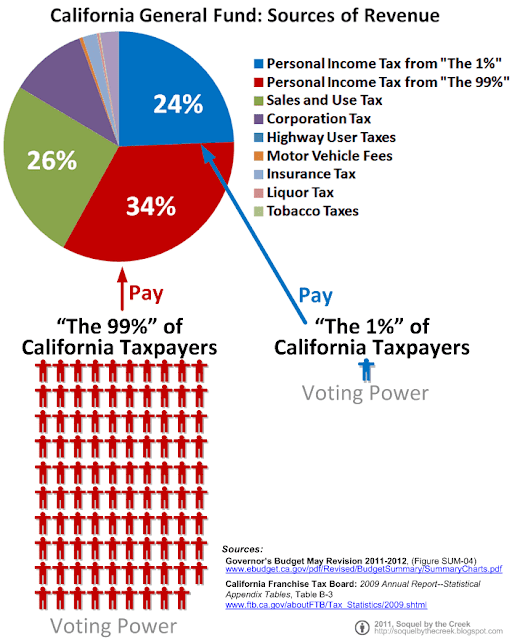 It should be noted that California ALREADY implements President Obama's "Buffett Test."
If the "Buffett Test" really provided a solution, then California wouldn't have significant budget shortfalls.

Also, in honor of Governor Brown's tax increase proposal, the following chart cuts the day by those making over $300,000 (the target of most of the increases) and the 2/3rds majority of taxpayers, required to pass a tax increase (and who happen to earn $60,000 or less).